Posted on October 21, 2010 by Francesca Gaillard

With a new job comes very often the tedious work of installing/configuring a new workstation. There is one thing I find very useful and like to install almost at the beginning: a way to quickly open any file in a generic editor from a right-click menu in Windows Explorer.
I often want to quickly look at a Delphi project file (*.dpr) for instance without loading it in Delphi, or at a command file (*.cmd) with something better than regular Notepad, or at any file in an Hex editor…

There is a way to do it, going to the file extensions properties and adding there the alternative applications that can open this file type. It’s OK on a case by case basis, but not for the zillions you want to open in NotePad++.

I liked that Win7 is smart enough to remember that you already opened a given file-type with xyz.exe and now proposes it as an alternative when you right-click on this kind of files; but you still have to proactively and preemptively open an instance of each file-type you want.

I much prefer to install broad spectrum targets in the “Send to »” menu. Any application that can load a file by passing its name in a command line parameter is suited to have a shortcut installed in the SendTo menu/folder. 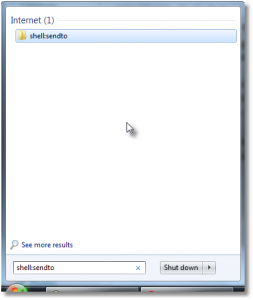 There you can manually add the desired shortcuts.
They will show up in the regular or enhanced (special Win7 feature when using Shift + Right-click) menu.

2. To avoid remembering how to access the SendTo folder and automate the creation of SendTo items… 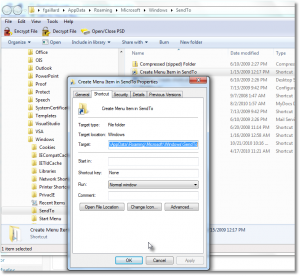 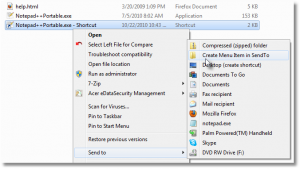 MyProg is in SendTo now! 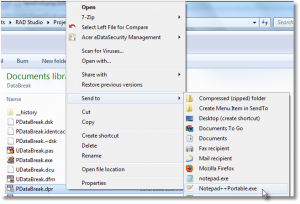 Warning: If you do it with MyProg.exe instead of a shortcut, a copy of the exe will go in the SendTo folder.

11 Responses to Adding Useful SendTo Targets for Delphi and more…